Difference between revisions of "Simulator"

Robotino SIM Professional is the perfect tool to simulate Robotino in environments created by yourself. All sensors/actors) of Robotino are simulated (including the new laser rangefinder and the manipulator).

For further information please send an email to info@openrobotino.org

One way to build a complete Simulation environment involves setting up Robotino SIM in combination with virtual machines that emulate a Robotino and RobotinoFactory.

The virtual machines will run the basic Robotino environment plus Smartsoft. A preconfigured VMWare Workstation VM can be found here: VM download (the VM was created with version 12 but should be compatible with most VMWare versions)

To use the VM simply import it into your Workstation and clone it as many times as you want robots in your simulated scenario. (Note: You will need Professional editions of the Simulation and VMWare Workstation to use multiple systems)

Each VM will require some changes to its configuration after it has been cloned:

All these settings can also be adjusted through the Robotino Web Interface.

(optional) In case you cloned the VM for multiple simulated robots you may want to adjust the host names of the machines to get better descriptive names when connecting to them via ssh or vnc.

A basic example of a simple work environment where the Robotino moves between two machines in a room. The workspace is simply defined as two nodes in front of each of the machines. 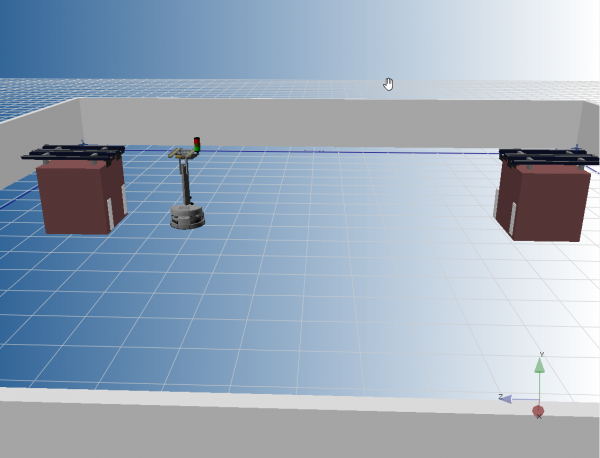 A more complex setup where a large number of robotinos share a wide workspace with multiple machines. The path network is set up in a way that allows multiple Robotinos to move simultaneously.

The double roundabout helps the robots to avoid each other while moving towards their goal positions. Generally, it is advisable to arrange the nodes in a near perpendicular angle and avoid overlap of paths as much as possible. Be mindful that one- and two-way paths can make a big difference in how the navigation network is used by the robots. 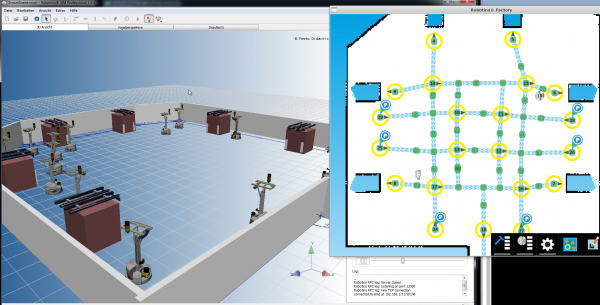